Inici / Actualitat / My trip to Berlin

My trip to Berlin Aquí teniu ‘My trip to Berlin, la redacció guanyadora del concurs narratiu en llengua anglesa sobre el viatge d’estudis de 2n de Batxillerat a Berlin. L’autor és Sergio Subías Caldés, del curs de 2n C. Enhorabona!
On the 1st of December, our trip to Berlin (one of the most beautiful cities in Europe) started. First, we went to our hotel in Alexanderplatz, the city centre. Then, around seven o’clock, after leaving the suitcases, we visited the Christmas markets, which were close to our hotel. There were several small wood houses plenty of Christmas decoration and festive food. In my opinion, there were too many people.

On the second day, we started our splendid but exhausting walk around the city of Berlin. Probably, this was the busiest and most interesting day of our trip.

We visited the Checkpoint Charlie, one of the frontier paths between the two Germanies and the place where most people were gathered to go from the eastern Berlin to the occidental Berlin the day when the Fall of the Berlin Wall happened. Close to the Wall, we had the opportunity to take photos with our friends. In addition, we also could contemplate one photographic exposition about the history of the Wall: a history based on the war and the horrors of the world.

In the streets close to the Checkpoint Charlie, we had the chance to eat the traditional German Bratwurst and visit the Postdamer Platzuna and several shops (for example, the Sony Center), comtemporary sculptures, museums (for instance, the Lego Museum), etc. Something I liked was walking around the city and comtemplating the festive spirit of Christmas with my friends, which I miss here, in Majorca. Afterwards, we went for a walk in Memorial Stones, a monument to the Holocaust’s victims. Furthemore, we could visit the Branderburg Gate, a symbol of the German reunification. Finally, we finished our day by visiting the Reichstag and the Berlin Cathedral (Berliner Dom). Something interesting about its structure was the style of the dome because it was similar to the Arabian domes. Lastly, after a very tiring day, we returned, to the hotel eager to rest. On our third day in Berlin, after a delicious breakfast (toasts with Nutella, hot chocolate, and orange juice), we continued with our sightseeing around the city, plenty of big avenues, green parks, interesting museums and history. We started the day by walking around the city centre and visiting its shops and parks. Also, we visited the Neue Synagogue, a very important place for the German Judaism. Later on, we went to Orienstrasee, a bohemian street plenty of street culture. After having lunch, we had the opportunity to visit the Museum Island, formed by five museums with different cultures and identities at the Spree riverbank. Finally, we had some free time to go shopping and have fun. Once more, we returned exhausted to the hotel. On the fourth day, we could choose between different options: going to the Zoo, visiting the Jewish Reclusion Centre or The Great Palace. I decided to go to the Berlin Zoo, where I could observe a great variety of animals (mammals, reptiles, aquatic species, elephants, anteaters, rhinos, giraffes, zebras, panthers, jaguars, gorillas, etc.). The animal that I liked the most was the white wolf because it has been my favourite animal ever since I was a child. After visiting the zoo, we did our last minute shopping, such as presents and souvenirs for our relatives and friends. One more night, we had dinner at the hotel with our friends and teachers and we enjoyed together our last night in Germany before our departure. In conclusion, I think that I will never forget this trip because it was very special for me: I spent one week in Berlin with my friends during the Christmas Season and I could feel the real Christmas spirit that I used to feel when I was a child. It was like a Christmas film with fairy lights, music and happiness. I wish I could return to Berlin again! 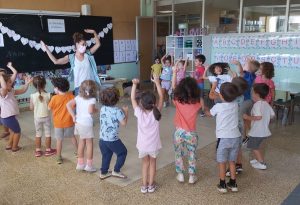 Visites per a famílies a partir del 9 de febrer (INFANTIL) 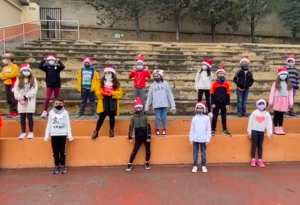